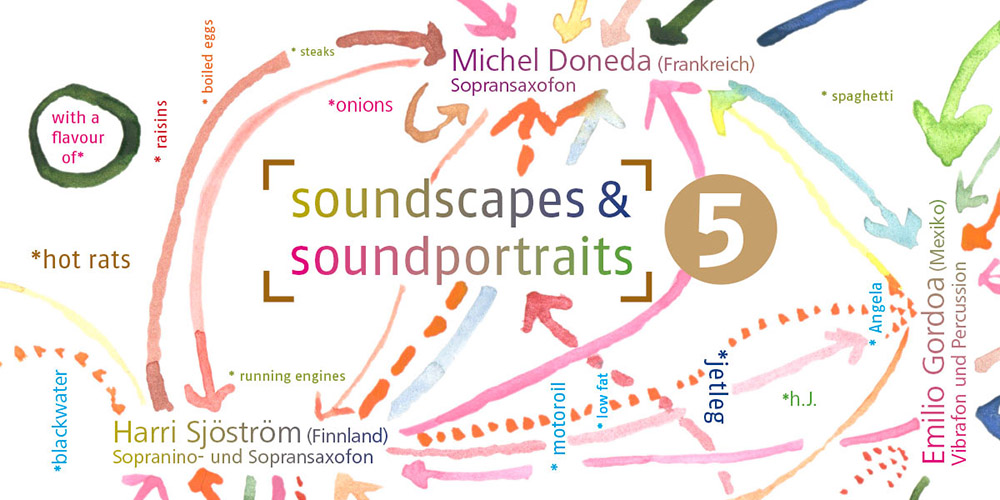 The fifth concert in the series Soundscapes & Soundportraits is a premiere: the three musicians play together for the first time. In this small trio-format we will very well be able to hear how different one and the same instrument can be played in instant composing: two soprano saxophones producing completely different sounds. Additionally there is the unusually original and dynamic performance of Gordoa on vibraphone.

Over the years, Michel Doneda (b. 1954) has developed one of the most extensive musical vocabularies in free improvisation. A specialist of the soprano saxophone, he has gradually moved from left-field jazz to the fringes of free improv ever since he began to lead his own sessions in the early ’80s. His playing can be at turns lyrical, playful, or raucous, and can switch from the liveliness of street melodies to circular breathing, microscopic sounds, or shrieking outbursts. His most frequent recording and performing partners over the years have included singer Beñat Achiary, percussionist Lê Quan Ninh, hurdy-gurdy player Dominique Regef, and bassist Barre Phillips.
Doneda made his first musical steps at age 15 in his hometown’s wind band. He spent the next decade playing in dance and jazz bands, all the while keeping an eye on the French avant-garde, especially the activities of American expatriates like Steve Lacy and Alan Silva. In 1980, now based in Toulouse (Southern France), he formed his first group, Hic et Nunc, with Steve Robbins and Didier Masmalet, a trio that remained unrecorded. Around the same time, he got involved with street theater, co-founding the Institut de Recherches et d’Échanges Artistiques. Creative popular expression and exchanges with street performers, actors, and poets have remained one of his main interests, particularly throughout the ’80s.

Harri Sjöström is one of the most accomplished composer-performers worldwide. In his performances, he applies contemporary techniques of sound generation as well as more ‘old school’ ones which at times sound lyrical, melodious, probably inspired by birdsong. He uses selected mutes, integrating unexpected objects like the by now quite famous plastic cup. With these mutes, Sjöström’s saxophone enters into a dialogue with itself; low notes sound a bit like a trumpet, while the higher range sounds like the saxophone; the trumpet (or trombone) and the saxophone react to and answer one another.
Born in Finland in 1952, he played piano and guitar in his youth and later found his voice in the music on soprano and sopranino saxophones. He studied music and fine arts in San Francisco in the 1970s, which led to participation in workshops by John Cage, Vinko Globokar, George Russell and Bill Dixon, and to study saxophone under Leo Wright and Steve Lacy. After returning to Europe in 1978 he played with Derek Bailey, Paul Lovens, Paul Rutherford, Reggie Workman (among others) and eventually started an extensive working relationship with Cecil Taylor on many projects, including five small group recording releases. He has also composed music for film and is still active today with his photography.