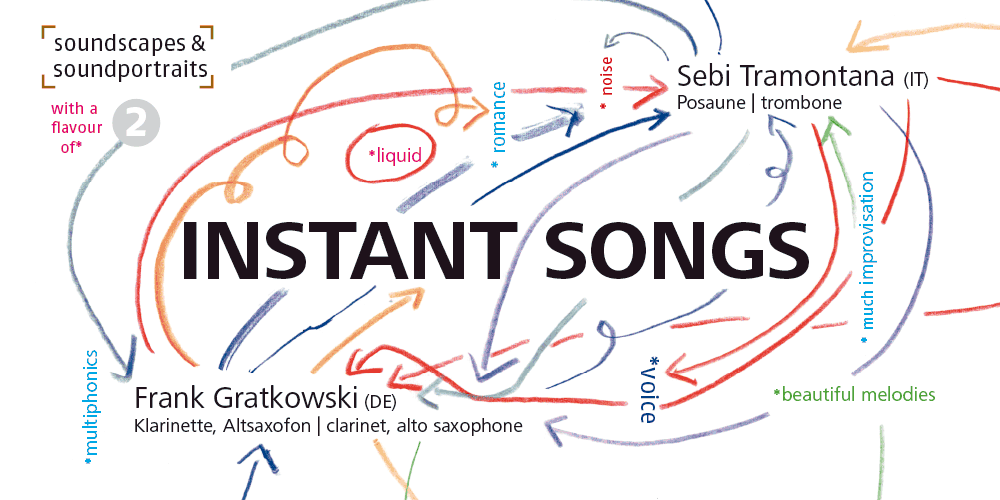 “Instant Songs” is the term with which Sebastiano Tramontana and Frank Gratkowski describe the music played in their duo performances. The music is improvised but sounds very composed and each piece has its own unique character.

Some of them have beautiful melodies, others include the voices of the players or use extended techniques like multiphonics and noise. Some are very romantic, some very abstract. But it’s all about the musical dialogue and the instant composition of songs. What both players love in their duo is that the music is very different from the other projects they are involved in. 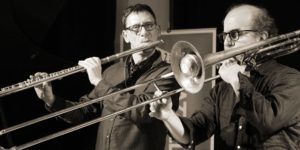 The trombonist is well-known as a musician with a unique style of interpretation, as a composer between jazz and contemporary classical music and also as a member of the Italian Allstar ensemble Instabile Orchestra. Collaborations with, among others, Mario Schiano, Frank Gratkowski, Giancarlo Schiaffini, Joelle Leandre, Paul Lovens, and Carlos Zingaro.

He has played in Europe, Japan, the US, and Canada. Tramontana lives in Munich.

Especially as when playing solo or in small ensembles the unusual clarity of his play is audible. Gratkowski is also known as being a talented researcher of sounds, who continuously works on the expansion of his sound repertory and on the exploration of tonal possibilities of his instruments. he performs his micro-tonally oriented compositions with the Multiple Joy[ce] Orchestra.

He has been teaching saxophone and ensembles at the Cologne, Berlin and Arnhem Conservatory of Music and is giving workshops all around the world.

Soundscapes & Soundportraits is a projekt by Harri Sjöström